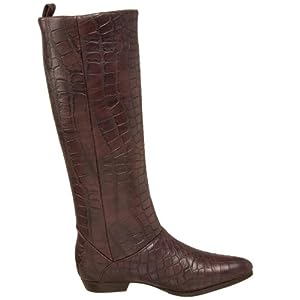 Although I have been personally spared so far, I am getting reports telling me winter is decidedly on its way. As we all know, winter is that annoying season of the year when mainstream designers abandon the more “whimsical” vegan materials and turn to good old leather for comfort. Bleah.

Luckily, there are vegan shoe designers out there, such as Cri de Coeur. Here’s some mock croc boots for you. They come in this and a darker shade (called “black” but it isn’t) and even though they are officially from last winter’s season, they are timeless enough for any season.

You can get these from Amazon.