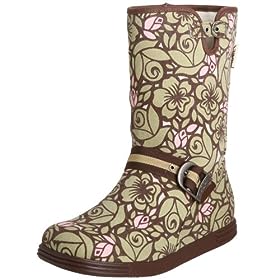 Well, it was only a matter of time till I ended up writing about something of the canvas boot range that has been so extremely popular over the last few years. These flat vegan boots by Sugar I think are a particularly funky example, with a funky flowery pattern that makes them stand out.

Having canvas shoes become trendy is somewhat of a double-edged sword, as things that go into fashion tend to come out of fashion too, which is when vegan fashion victims risk looking somewhat like yesterday’s news.

I remember back in the day when I’d just turned vegetarian and stopped wearing leather, there were practically no non-leather shoes around. I was reduced to wearing Palladium shoes – sort of canvas walking shoes that came in black or tan. Then they suddenly became hugely popular and mainstream, which was great, as it resulted in there being lots of funky-coloured Palladiums about (which I bought), and wearing them became a fashion statement. Then they went out of fashion and wearing them became a totally different fashion statement.

And the moral of the story is? Well, for one, enjoy the golden age while it lasts and get yourself some nice canvas shoes in slightly more interesting designs than you otherwise would. Once the trend is gone, it’s up to you to decide whether to keep wearing them, depending on how much of a fashion victim you are. If your shoes are cool enough to match your look and be attention-grabbing enough on their own (which these certainly are), then you should be OK whatever.