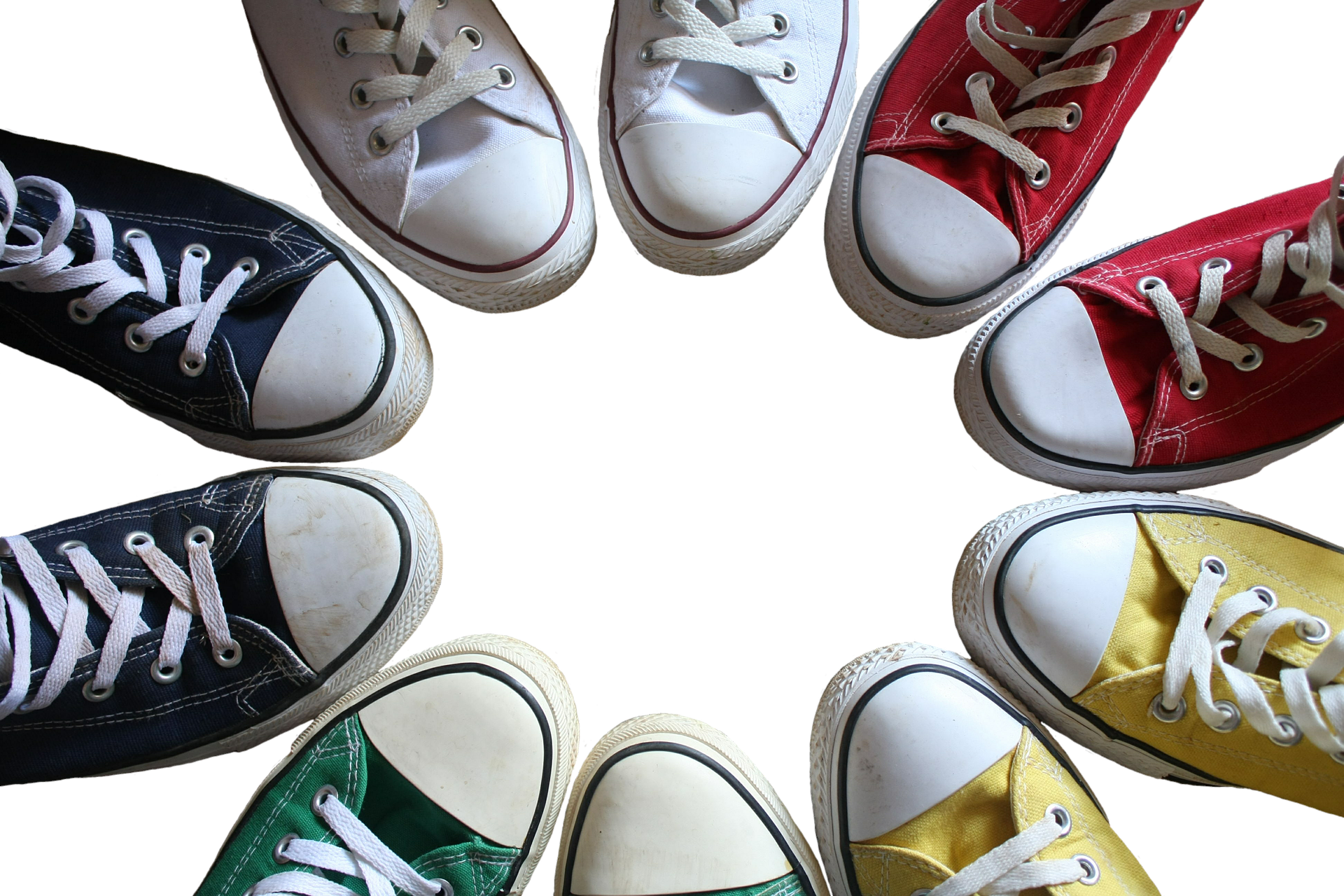 The following companies and shops are not exclusively vegan / vegetarian, but offer a good variety of vegetarian and vegan shoes.
Unlike the exclusive vegan shoe companies, these are not necessarily ethical and environmentally friendly. Some companies that make leather-free shoes may also use animal-derived glue. I’ve included this info where available.

H&M – Lots of their shoes are vegan and are clearly marked as leather-free both in-store and online. It’s a great place to find cheap, on-trend vegan shoes to go with anything that’s considered cool right now. Not exactly long-lasting, but readily available and affordable. Supposedly don’t use animal glue.

Zara – Apparently don’t use animal glue in their shoes, so those marked as otherwise vegan, are 100% vegan. They tend to hide leather in weird places, though, so make sure you read the entire list of materials before you buy. Plenty of actual vegan styles if you look.

Asos – Are very good at listing the materials on their website and have plenty of vegan styles.

Modcloth – I am not entirely sure whether they have their own brand of shoes, but this cool American fashion site is great for keeping up with current hipster styles . It offers plenty of clearly marked vegan footwear choices from some hard to find brands.

Free People – Offer a small range of affordable shoes and boots in keeping with current trends. Actually marked “vegan” so you don’t have to go looking.

Toms – Cute, kinda iconic slip-on shoes, as well as trainers / sneakers and boots for men, women and children. Lots of plain styles but also fun, limited edition patterns. Many styles are vegan and they’re very clearly marked. Collect them all!

Chinese Laundry – Affordable, on-trend women’s shoes. Quite a few leather-free styles. You can search the collection by material if you scroll down, though beware of shoes that contain both fabric and leather.

Burtons  – a British men’s fashion brand. There’s a good selection of leather-free shoes and boots and materials are clearly marked.

Po-Zu – Ethical, sustainable footwear. Lots of vegan options, from sandals to trainers and even some boots. Funky casual stuff with lots of interesting, unusual styles.

Macbeth – a skate shoe / trainer company fronted by Tom DeLonge (from the band Blink-182) and some of his other rocker friends. They have an extensive vegan range of funky skate shoes that range from the good-looking but understated to the outright awesome. That’s 100% vegan – no animal-based glues.

Superga – distinctive plimsole style trainers / sneakers in cool styles like metallics, velvet, glitter and flatforms. Most are vegan, though beware of some leather ones.

Vivobarefoot  – Minimalist sports shoes for men and women, including running shoes. Lots of styles are vegan. This is their UK site and this is their US site.

Asics – I’m sure you know Asics. Their shoes are everywhere. They have loads of vegan styles and are really not that expensive. This is their UK site and this is their UK clearance site where you can usually find some good deals. US site is here.

Converse – Because: duh. Do you know any vegan who’s never owned a pair? I don’t either. I’m listing them here mostly to let you know that like many of the big brand shoe companies, they can’t guarantee they won’t have animal glue hiding in their shoes. Still, they obviously do lots and lots of leather-free styles and are literally everywhere.

Dolls Kill – Loving their style! Everything from quirky to sexy and insane. Lots of heels, boots, massive platforms and other goodies by various brands, including the awesome Current Mood (which I believe is exclusive?). Most of their styles are vegan. I almost put them in the “vegan shoe companies” section, but then discovered they make at least one type of boots that’s actually real leather.

Rocket Dog – a young, trendy shoe company with relatively cheap and cheerful offerings. Most of their shoes are vegan, though they do have a worryingly increasing range of leather shoes. Apparently even the leather-free shoes can have traces of animal-derived glue.
Available in the UK from Schuh (and you can find them on eBay too)

Schuh – A British chain of high-street shoe stores specialising in young, trendy footwear. Apart from selling stuff by other people, they also have their own brand of shoes they make. Many of these are vegan and are affordable and very cute. They’re not the most long-lasting with heavy use, but I’ve generally gotten a few years out of them.

T.U.K Shoes – an alternative and relatively cheap shoe brand specialising in creepers, mad platform heels, emo, punk and retro-feel shoes, etc. The majority of their shoes are not made of leather.
Available in the UK from Schuh (and you can find them on eBay too).

Dr. Martens – yeah, they’ve always had limited edition canvas docs, but now they have a bunch of consciously vegan boots, too. Apparently the only boots guaranteed to be free of animal glue are the ones in their vegan range.

Irregular Choice – Some really crazy shoes for women. Seem to now have a wider range of leather-free shoes, but make sure you check the description before you buy, as some hide leather linings and trims.

Green Shoes – Artisan bohemian / respectable hippie shoes that are ethical, eco-friendly and will most likely last you a lifetime. They do make leather shoes, but most stuff is made to order and pretty much their entire range can be made in vegan materials.