I went to see Sherlock Holmes the other day (awww my first childhood hero), so now I’m all about the Victoriana and steampunk boots. I wrote about some steampunk boots already, but I decided to take a look around the net for some more steampunk offerings.
The vegan options don’t always look that great, I must say, sadly. Still, there are some out there that don’t completely suck. Here’s some of what the net has to offer. 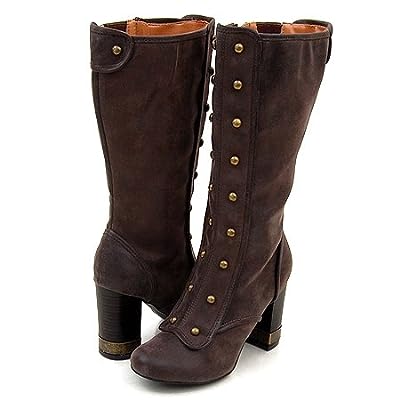 First up are these knee-high boots that are supposedly “bohemian” according to the description, but they look pretty steampunk-esque to me. OK, so they don’t have lacing, so probably not for the purists, but the design is still pretty Victorian-looking and would fit in with the period look. Obviously, they also come in black.

You can get them on Amazon.com. 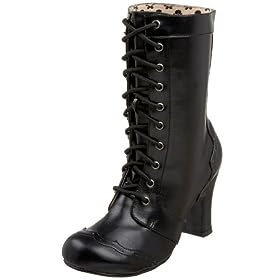 And here is T.U.K’s offering on the classic granny boot. Never ones to miss a trend, T.U.K have had a few Victorian-inspired offerings, including a tongueless granny boot, but this is the most versatile and classic one I’ve seen them do. It’s not nearly as charming as the traditional leather ones but will certainly do the trick and put the finishing touches on your outfit.

Yup, these are also available at Amazon.com.

For more choice in Vegan Victorian and steampunk boots for men and women, you can also try Pennangalan. They have quite a few suitable pairs, including the one featured here, the “Polly Magic”. Magic is the sole and Polly is the upper style, hence the name. They also have variations on the theme in both sole and upper and I do believe you can sometimes order a custom pair out of their material and style combinations (or at least you used to be able to, I haven’t tried in some time). Their shoes are handmade in the UK and usually end up looking and feeling better-made than your average alternative vegan shoe.