Wellies, Wellington boots or rain boots are a somewhat controversial footwear choice when it comes to one’s fashion sense. Originally designed for farmers and gardeners, they are not what you’d normally expect people to be running round in on their way to a night at the opera. But while it’s true that wellies and rain boots are not quite high class, the crappy weather that “graces” the many UK summer festivals, has created a need for funky rubber boots. In the UK, summer is traditionally the high season for the fashion-wellie. In big American cities (and elsewhere), however, I’ve seen women happily walking around with fashionable versions of the rain boot. The recent biblical floods experienced across the British Isles seem like a good enough reason to write about some interesting takes on the concept of the humble rubber boot, because I think some of them are actually quite cute and make for a good and reliable vegan boot choice. Today’s offerings are in the mod and biker department, of which there seem to be a fine variety. 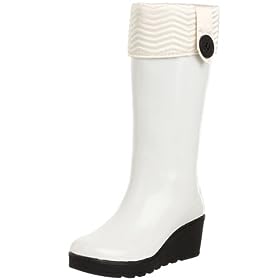 These Sperry Top-sider boots are pretty neat, with a wicked wedge heel and a folded cuff at the top. They come in several colour combinations, seen here in white with a white cuff, black wedge and a big black button, which makes them look very mod indeed.
These are also available from the Amazon.com website 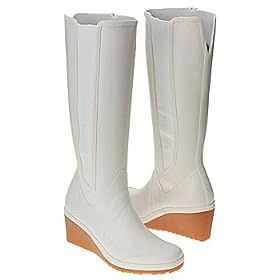 And if it’s the rainproof vegan mod look you’re after, check these out too. Made by Tretorn, who are apparently Swedish, these look seriously 60s in this white version and the yellow version they also come in. There are also two-tone version that look slightly less 60s and are also totally striking. They don’t even look like they’re made of rubber in the picture, though I’m sure they would if you looked closely.
These are also available from Amazon.com.

And now for the rubber biker boot part of this post.

I already wrote about the Schuh version of biker boot-inspired wellies (shown in the post in not very biker-like purple, but they do come in black too). This is the Office shoes take on the biker wellie – full height and with an extra strap, buckle and O-ring detail. Not too shabby for a wellie, really, though still based on the traditional wellie look and feel. Available from the Office website, where you can also find standard wellies with funky designs.

These boots from the Bloomingdale’s website are somewhat similar but are, in fact, less traditional. You can tell the difference between boots that are thought of as “rain boots” (urban) and those designed with the wellie concept firmly in mind (field conditions, such as a festival or a farm).
These are definitely in the rain boot department and are therefore classier and could potentially even go with your regular day clothes. Kinda. Gotta love the looping detail and chunky ring, though the flat sole would probably not work so well in a field (pretty good for the city streets, though!).