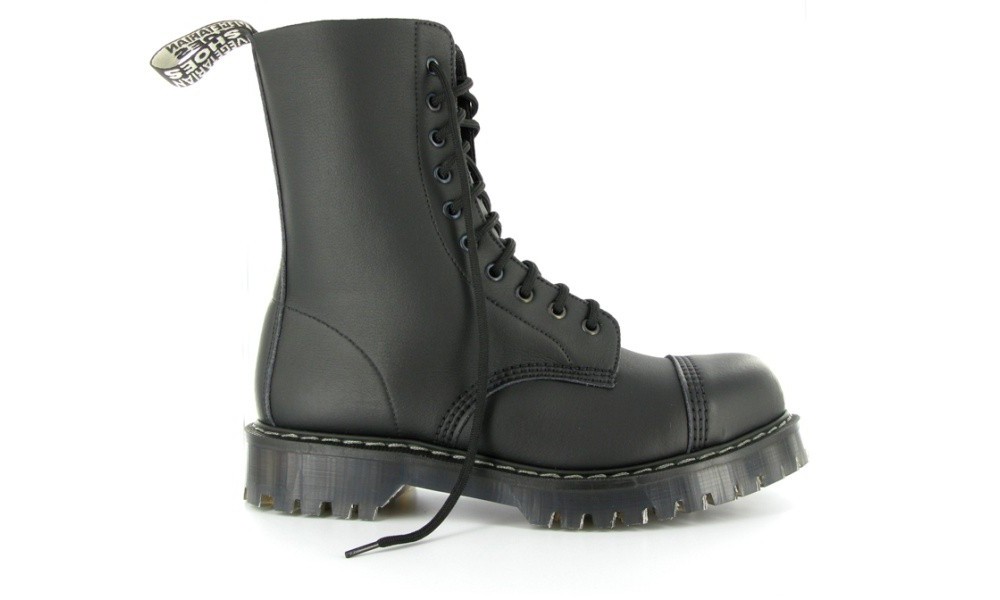 The original version of this post was published on June 9, 2010, when I was considering my vegan boot options after having taken a very disappointing pair of vegan commando boots to Burning Man the year before and basically ruined them in a week. I went on and bought these Vegetarian Shoes Airseal boots shortly afterwards.

I broke them in at Ozora festival in Hungary, where I walked up and down muddy hills for 10 days. Then I took them to Burning Man that year and five more times since, as well as to other festivals, gigs, hikes and plenty more adventures. Now, seven and a half years since I bought them, I’ve decided it’s time to give these a proper review. Not because they are about to go to shoe heaven (far from it), but because these are now officially the best pair of boots I’ve ever owned.

Here’s my pair, after six visits to one of the most inhospitable places on earth, the Playa (where Burning Man is held):

You might not know this if you’ve never been to Burning Man, but the Playa is a dry lake bed covered in nasty, corrosive alkaline dust. It gets into everything and can only be removed with vinegar (to an extent). As you can sort of see in my crappy picture, these boots are still a bit dusty. It will take a few more cleans and shines to get them back to black, but I’m kinda sad and like to wear the dust as a reminder, so I’ve left them like this. The boots are pretty much unharmed apart from this. The laces came apart a couple of years ago after a particularly dusty burn and had to be replaced, but that’s it. Considering the fact that I literally ruined my previous pair of boots in one week out there, this is pretty fucking impressive.

So here’s what I can tell you about these boots, now I’ve owned them for seven and a half years:

They are amazing value for money. The Vegetarian Shoes site will tell you they last for a really long time and they don’t lie. I used to own a pair of their leather-Converse-style boots and those died after about 7 years, which is still a really good deal, but these are not showing any signs of dying any time soon. Plus, you can get them resoled if necessary.

They are made of really tough lorica material, which means they wear like leather. It takes a while to break them in and until they do, they hurt like hell if you overdo it. Once broken in, though, they fit like a long lost friend.

The site says they run large and you should order a size smaller, but I ordered my regular size and wear them with really thick hiking socks all the time, which is the only way to survive the places I take them to without blisters.

They are heavy. The steel toe caps and heavy lorica means these way about 1.5kg as a pair. How do I know this? Because I often have to wear them going through airports to avoid paying overweight charges on my luggage. The fun part is that I almost always get “randomly selected” for extra security checks when I have these on, because apparently I look like a dangerous revolutionary when I wear army boots.

Being heavy, they take some getting used to. I’ve taken these on hikes and have done a lot of walking in them. I wouldn’t buy them specifically as hiking boots (there are much lighter shoes and boots you can get), but the soles do have great grip, so you can wear them hiking. Also, they basically make every day leg day.

The steel toe caps are awesome at gigs because people can step on you and you won’t feel a thing. There’s a dent in one of mine now because a very heavy friend of mine tested them for me by putting most of his weight on the boot.

I now also own a pair of the 14 eye boots that’s been given to me by a friend, and I love those too (they are basically the same as these but taller and, in my case, cleaner). My original post complained about there being no side zip, but I know Vegetarian Shoes now do a 14 eye version that does have a zip. Also, these 10 eye ones now come in different anarchist-friendly colours.

So here’s to the best pair of boots I’ve ever bought in my life. They are also unisex and I have a few guy friends who own them, and I’ve recently recommended them to a friend who isn’t even vegan or vegetarian, because they’re easily as strong as leather boots.

You can get them from the Vegetarian Shoes website.