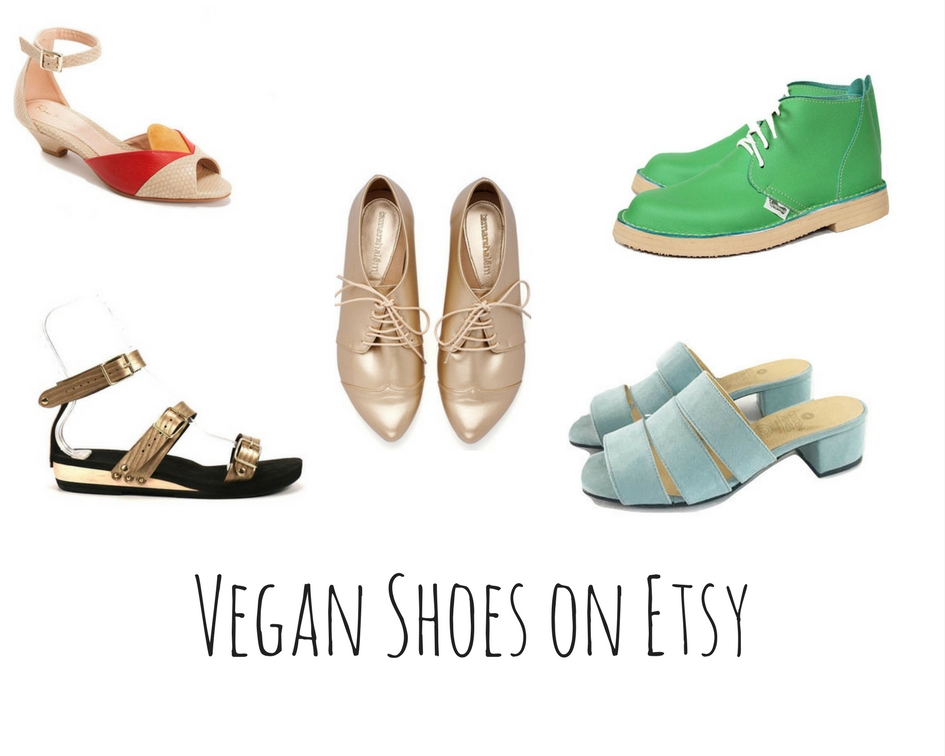 Etsy has become one of my favourite places to hunt for vegan shoes. There are all these great designers from all over the world, making absolutely unique vegan shoes, sandals, boots, heels, pretty much anything you could ever want! Plus occasionally get some unique vintage shoes, too, though watch out for these. It’s hard to tell whether or not something is vegan and not all sellers are good at it.

Here’s my growing list of vegan and vegan-friendly shoe stores on Etsy. It’s a work in progress, so feel free to let me know if you’ve found any more!

A Brazilian designer making one of a kind vegan shoes out of rubber and bamboo. I love the strange and beautiful designs, though there seems to be quite a random selection, with only one shoe available per size at any given point. So far everything appears to be 100% vegan.

Gorgeous leather-look boots and shoes from Spain with an earthy, quirky design.  Not cheap, but appear very well made. Everything is vegan. Has stuff for men, too.

An Israeli shoe designer with a limited,  but very attractive vegan range, including the lovely gold oxfords  in the picture above.

100% vegan shoe designer specialising in retro-inspired heels, flats, oxfords and occasional booties. A great source of vegan bridal shoes and pretty shoes with sensible heels. The pretty sandals in the top left of the picture above are by her.

I think these are actually some sort of Japanese work shoes. Many of them (if not all) have handy steel toes, but they’re made of canvas and rubber. Perfect lightweight clubbing / cyber type boots that are 100% vegan and 100% awesome. I owned a pair till I killed it and can confirm these are instantly and incredibly comfortable. They have stuff for both men and women.

I assume the name was meant to be “Free Rangers Vegan Footwear” but Etsy has some sort of length restrictions on names. Oh well, we get the idea anyway!  This is a British company that makes some solid, traditional vegan footwear. Lots of desert boot type stuff and chunky sandals, including stuff I can only describe as old lady sandals. They also make vegan leather-look belts, wallets, bags and even sporrans (!). The bright green boots in the picture above are theirs. Basically sensible, good quality stuff that’s comfortable and long-lasting. Have stuff for both men and women.

A traditional leather sandal shop that has an extensive range of vegan sandals for adults. I even recognised the tomboyish sandals I used to have as a kid (when I was still wearing leather), only these are my grownup size and vegan! If you love the look and feel of old school leather sandals but want something cruelty-free, these guys will sort you out. Many sandals are unisex.

Colourful espadrille boots for men and women. Everything is vegan, as far as I can tell. It looks like it’s trimmed with leather, but it’s actually vegan leather.

Super cool wood sandals, clogs and famous ribbon sandals you can wear in a load of different ways. Everything is sustainable and 100% vegan. Very unique designs. They also make vegan bags. The gold sandals in the pic above are theirs.

Cool vegan trainers (sneakers), boots and accessories, some with geek / gamer and vegan themes. Have stuff for both men and women.

Super hippie shoes, boots and sandals made with vegan fair traded ethnic materials from Thailand. I think they’e made by tribal women, or at least the fabrics are.