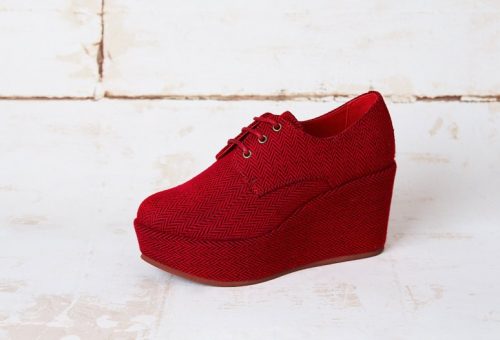 A 100% vegan, ethical and PETA approved French shoe company with gorgeous designs for both men and women. They’ve been around since 2011 and have apparently won all kinds of awards, which is hardly surprising, considering how pretty their shoes are.

The shoes are made in Portugal (where it seems most of the EU vegan shoe brands have their factories) out of eco-friendly materials (whenever possible). They are sort of casual / smart casual, but with a distinctly fashionable French flair (along with some American influences) and a bit of an alternative twist.  There are lots of smart leather-look trainers (popular with celebs like Emma Watson, apparently), sandals and boots that would go with both very casual and smart (but, “edgy”) looks.

I love their designs because they are very wearable and practical but are also incredibly chic, with cool twists, bold (yet still versatile) colour options and just generally what I consider good styling.

Prices are comparable with high-end leather shoe companies, usually between 100-200 euros, though look out for their sales where prices can drop as low as 50 euros.  I’m still saving up to buy some shoes from them, so can’t personally testify as to their durability, but will update this page when I’ve had the pleasure.

France is not exactly known for being veggie-friendly, so if you’ve always coveted the French style but were denied because, well, leather, now you can totally buy into the look and know that you’re also supporting a friendly vegan company.